Though TownNews representatives often participate in discussions, this is not a customer service site. For immediate help, call 800-293-9576 or submit a support request via our online ticketing system.

No similar topics found.
No topics

We keep getting the runaround from FB/Town News but we have no idea how or where to add additional moderators to the Facebook comment plugin on our news website. Anyone have any ideas on how to do this? The person who set up the integration left and we haven't been able to figure out how to actually delete spam comments from news stories. When we asked Facebook, they gave us script that Town News said it doesn't have in the system.

The latest Flex release said: "We are adding a new "admin link" to login screens which will be used by TownNews staff only."
So now, when users go to log in, they see an Admin login link ... thinking maybe that's where the log in to administer their account (change passwords, billing, etc.). When they click they are taken to or blox admin panel, where their login efforts will be unsuccessful.

Question: How does having the Admin Login link their help users?
If we really needed it... couldn't we hide it somewhere on the site less prominently, or use lotame to only expose it to admins?

How to not display "updated" status above article

Quick question. Say there was an article you didn't want to show the "updated" status for next to the date. Is there a way to selectively hide that for a particular article? And if so, how? For instance, in Blox, there's a function for the paywall bypass, where we type in under 'custom properties' "subscription bypass" and "true" - can someone please let me know if there's something like this for not showing if an article was updated?

Thanks for your time.
John

Can you describe a little more about your use case? For example, if you're just making a small text change, and don't want to declare it as a real update, you can use this feature: https://help.bloxcms.com/article_1918d444-1034-11e8-bec3-4b39d1d4d4c7.html

Is there a way to show the number of votes cast in a poll?

Unless we are missing something, there does not appear to be a way to display how many votes have been cast in a poll. The results only show the percentages. Is there a setting to show the actual votes?

The counts are there, they are just hidden by default. You can use CSS to display them or move them around:

If you display both, they will essentially be on top of each other, so you'll have to use CSS to move one of them around.

Batch upload/batch edit is especially useful when dealing with photos but I am disappointed it does not automatically add the byline when I select the user.

For anyone using Blox Offers, do you have any marketing material samples that you can share?

From new integrations and functionality, to design layouts and blocks, we’re constantly working to improve our products. At our August customer webinar, Christine Masters, product director for BLOX CMS, showed off the recent BLOX CMS features and updates you need to know about. 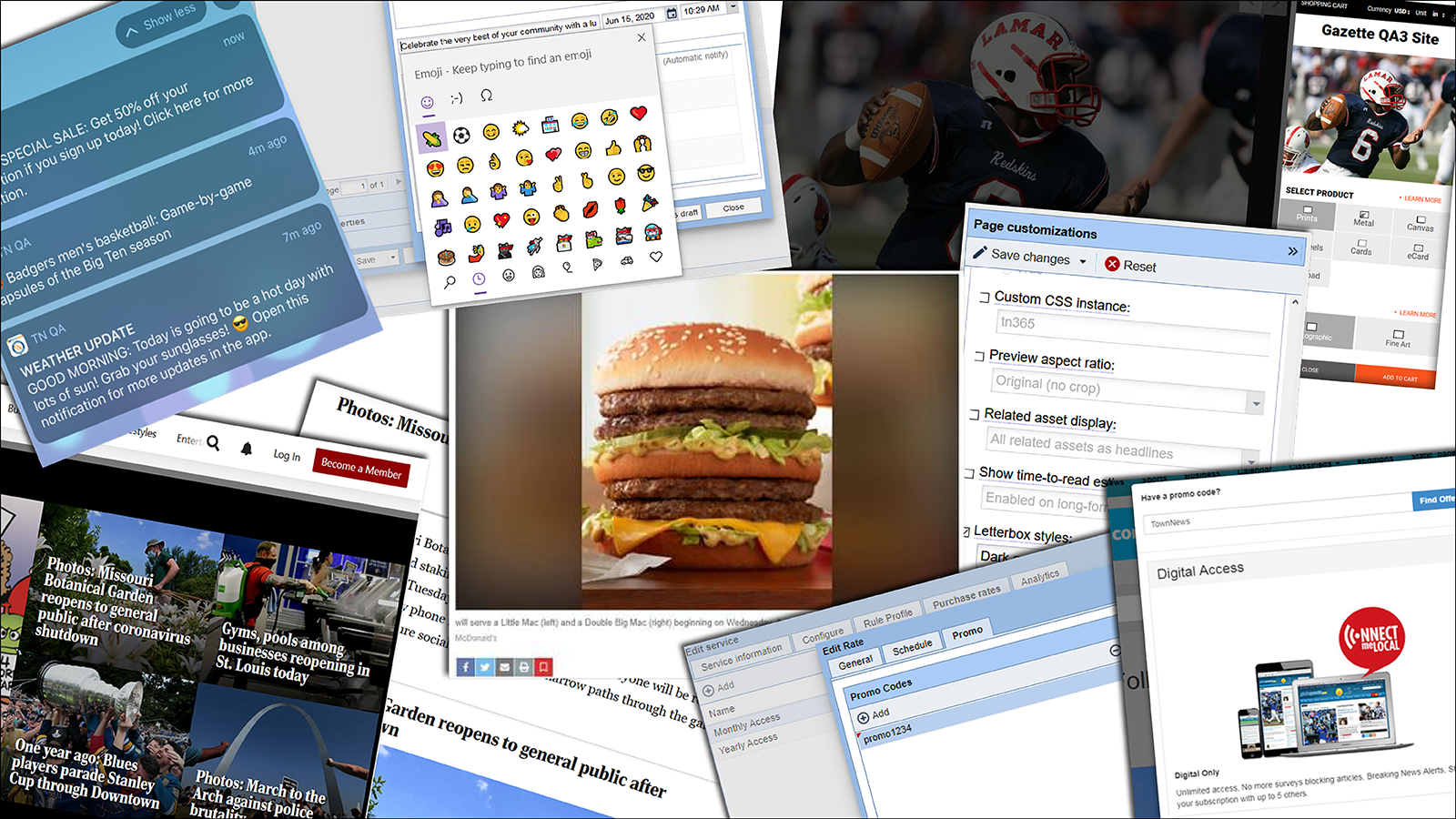 Ready to get started? Watch it now.

Does anyone have a good way to pull the number of stories as well as length from BLOX? I'm trying to create a report to track how many stories per week each reporter is putting into BLOX and how long they are. I'm finding how many but not how long.

Nic, we have a new deep analytics platform called Data Insights that provides this data as well as a great deal more. You can get some information about it here https://townnews.com/news_room/townnews-to-launch-data-insights-a-powerful-new-way-for-media-companies-to-analyze-and/article_b0e65482-1db5-11ea-9b8b-3b88e060517c.html or contact your sales representative to get a demo of the product.

There is currently a 40-word limit built into the templates for summaries in RSS. I'd suggest having a URL setting where you can define desired number of words and/or use full summary when one exists.

I would strongly suggest that you add the ability for us to have a custom alert tone for the NowApp.  Having a distinct alert tone sets our push notifications apart from all other news apps (or for that matter, any other sounds your device might make).

Several other news apps have this capability, and I'd like to see the NowApp have this as well.

I wanted to make the suggestion for Wordpress-style behavior that would display an Edit button on every article when the system detects that the logged in user is an admin. Clicking the button would then take the user to the asset in the BLOX admin for editing the story.

This would be very handy when an editor notices a typo and needs to quickly make a fix.

Now for papers like us that have TotalCMS obviously it would be much more complicated to implement; but wow, it would be awesome if it could be pulled off and open the TotalCMS admin panel with that asset selected in a search.

Either way it would be a cool feature for publications that only use Town News for their website.

Buttons for Posting to Social Media

We want to suggest a button in the backend for banner ads to be able to send our ads to our social media pages. We have customers that are currently requesting that their website ads be pushed out on social media for an upcharge. Creating these buttons would make this easy and efficient for us to do quickly instead of having to log into each individual account and post it. I know this is possible, because our classifieds at https://classifieds.douglas-budget.com/ allow us to share this when you click on one of the ads.

Has anyone made the switch to EVVNT? I would love thoughts? input?

A reader came into our office today with a couple of e-edition questions (one was about how to print portions of the e-edition - I started a feature request for this a few months back https://community.townnews.com/communities/1/topics/1241-feature-request-e-edition-clip-and-print-tool)

He said that he often uses the auto-scroll feature that is built into most mouse devices that have a scroll wheel, where if you click the wheel, a cursor pops up allowing the user to scroll up or down at an adjustable speed. That functionality is disabled in the e-edition due to the click-and-drag hand cursor that works with the left mouse button. I'm wondering if it's possible to re-enable the scroll wheel/third button functionality without disabling the hand cursor. If you need further clarification as to what I am talking about, let me know

Feature Request: Auto-moderation, hide comments instead of removing them

We had a reader make a suggestion that I like and want to submit as a feature request.

How about giving sites the configuration option to have these auto-moderated comments hidden by default instead of automatically removed. The system could display something along the lines of "This comment has been reported as inappropriate and hidden from view. To read it click here:"

It could then unfurl and display after the user has acknowledged they want to read it anyways.

If an admin later approves the comment that warning would disappear and it would become un-hidden by default again.

1. What problem(s) does this idea solve? Why do you need this idea implemented? Provide as many problems or use cases as possible.

Allows the automating hiding of potentially inappropriate comments while preventing brigading that allows users to completely remove a comment they disagree with until an admin has time to review it.

2. How often would you use this feature?

3. How many people in your organization would use this feature?